END_OF_DOCUMENT_TOKEN_TO_BE_REPLACED

When everything in your life is screaming "I NEED ATTENTION NOW!", no time management tool, mobile app, project management system, wall planner, organiser or 'to do' list is going to help. What you need is a reality check. 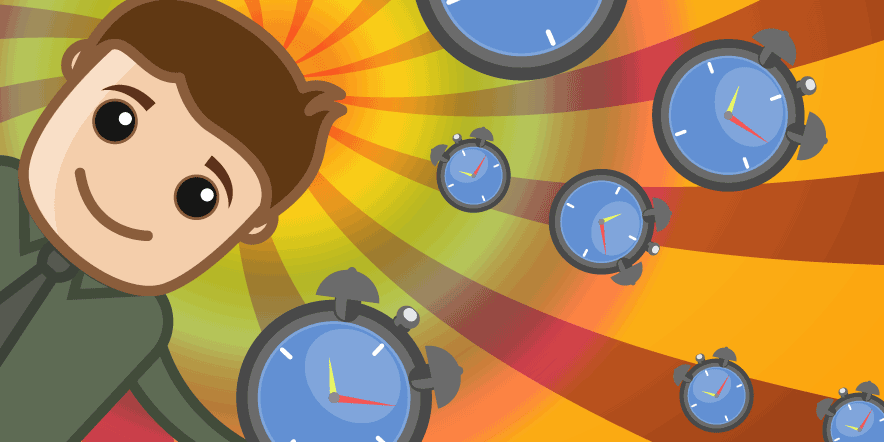 Working smarter is the only effective way to manage time. Or, as I prefer to think of it, 'use our waking hours wisely'I used to have a boss whose only answer to my workload problems was "work smarter". I don't know if you've ever had anyone tell you to "work smarter" when you've been working 18 hour days, living off vending machine snacks and snapping at family and friends for months, but my response was to punch him in the face. Or rather that's what I pictured as I smiled through gritted teeth.

He might not have expressed it well - or at the appropriate time - but the "work smarter" philosophy is pretty much the only effective way to 'manage time'. Or, as I prefer to think of it, 'use our waking hours wisely'.

Let's start with some obvious facts. Time, like money, is a finite resource. No matter how diligent you are with it, there's never enough of it to do everything. But while few of us waste money on worthless goods, many of us waste time on worthless tasks.

We take on everything that's thrown at us. Come in earlier. Stay on later. Skip lunch. Avoid socialising. Write lists. Work harder. Juggle more. Tick things off our lists. Start new lists. Get more things done. And get little or no thanks for our efforts.

The only way to achieve goals is to set themBeing busy doesn't equate to be being effective.

You can reply to every email. Take every phone call. Produce beautiful spreadsheets and grow your own quinoa. But if your goal is to double your income, run a small holding on the Isle of Mull or play bass in a rock band, you're not 'using your waking hours wisely'.

So, let's state another obvious fact - the only way to achieve goals is to set them. Set them. Plan how you're going to achieve them. And stick to them.

If you're constantly grabbing at everything, starting new stuff and going with the flow, you'll do lots and achieve little.

Stick to a few big goals, try different ways to achieve them and you're more likely to get the right results.

Okay, there's probably a lot more than 5. And you've probably heard them all before. And even if you follow them to the letter, there's no guarantee they'll work. But at least you'll stop kidding yourself that the panacea to all ills is time management.

1. Know what you're supposed to be doing

If your life's ambition is to be the busiest person in the psychiatric ward, carry on trying to do everything.

If, on the other hand, you want to keep your sanity, talk to your line manager/partner/best buddy/psychotherapist and agree what you're supposed to be doing with your life.

Then write yourself some goals. Goals remember, not tasks.

2. Give yourself permission to fail

Very few of us achieve our big goals. Life/work/people/sickness/laziness gets in the way.

If you're holding down an important job; looking after kids, pets and elderly parents; and trying to maintain an element of romance in a relationship, you probably need to dump/delay that novel you've been trying to write since 1992.

You know that job that's only going to take a couple of hours so you've plenty time between now and Friday to do it? No. Never. Forget it.

Experience shows that it will take at least twice as long as you thought. You won't have the info/resources you need. Somebody will add/change something. Nobody will be around to proofread it/quality test it/deliver it. And you'll get dragged into a three-hour meeting you didn't know about.

Don't just stick deadlines and appointments in your diary/planner/project manager thing. Go through every element of the job and put those in the diary too.

4. Plan for the unexpected

Even if you're dead good and plan in every element of a job, you have to be realistic about how long you can spend on it at any one sitting. Email. Phone calls. Colleagues. Customers. IT systems going down. Interruptions are part of life.

Don't fill your planners with just what you're working on. Plan in time for problems, reactive tasks, interruptions. If they don't happen, it will be like winning the time lottery!

5. Recognise the difference between urgent and important

When we're under pressure, everything seems urgent. The deadline we've known about for weeks is suddenly on top of us. There's a shit load of stuff that needs doing. And everyone wants everything yesterday.

Something isn't urgent just because someone says it is.

Urgent tasks are things that if they don't happen immediately people will die. Or millions of pounds will be lost of the stock market.

When you're sinking, stop thrashing about, take a deep breath and ask yourself what's important?

What will be the consequences of not doing something immediately? What one thing among everything else you have to do will have the best long-term effect?

Important tasks are tasks that help you achieve your long-term goals.

Changing the habits of a lifetime?

I appreciate than none of this is easy. A few tips and mantras aren't going to change the habits of a lifetime. But while it sounds crass, doing the same thing will get you the same results.

Take a risk. Don't reply to that email immediately. Be realistic about how much time to spend making a PowerPoint slide look good. And try to consider the long term effect of your actions.

Remember, nobody ever lay on their death bed wishing they'd spent more time at the office.