END_OF_DOCUMENT_TOKEN_TO_BE_REPLACED

I'm a very sad person. I love ticking things off my 'to do' list. I love it so much that I actually add things to my list after I've done them just so I can tick them off. 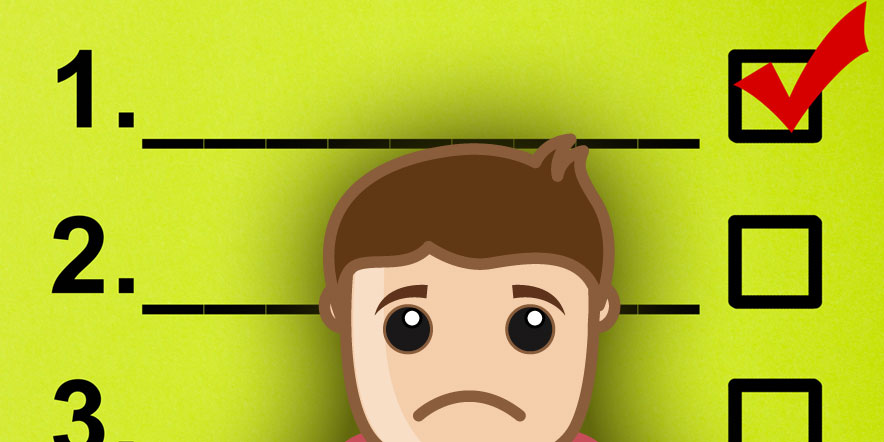 What do we do when we feel overwhelmed by the ever-growing lists of tasks...?It turns out that I'm not alone in this self reward behaviour. There's something in the satisfaction of ticking things off (or, in my case, putting a wavy line through) that makes us feel in control of our workloads and good about our achievements.

Whether we use pen and paper, Microsoft Outlook Calendar, our iPhone or something like Todoist, everyone loves a good 'to do' list.

However, what happens on those days/weeks when we're so busy we not only DON'T tick things off our lists, we keep adding to them? What do we do when we feel overwhelmed by the ever-growing lists of tasks, chores and responsibilities?

I was losing sleep, getting depressed and becoming more and more inefficient...It might sound like a waste of time, but 'done' lists give us an enormous sense of achievement. And that sense of achievement is what drives us on to (eventually) work through our responsibilities.

I discovered the benefits of the 'done' list when I was going through a particularly busy period in my life. I found the sheer amount of work overwhelming and the dissatisfaction of never completing my 'to do' lists utterly frustrating. Worse still, I was losing sleep, getting depressed and becoming more and more inefficient.

So one night I decided to write down all the things I had done that day — rather than focus on all the things that I hadn't. It was enlightening. Yes, I hadn't written a blog post but I had written damned good sales letter for BMW, MINI and Mazda. I hadn't called everyone I was supposed to have called, but the people I did call were the ones who would have the greatest impact on the projects I was working on.

So one night I decided to write down all the things I had done that day — rather than focus on all the things that I hadn'tThe result was a feeling of great satisfaction, a more positive attitude to the next day's jobs — and a decent night's sleep to boot.

My brother-in-law has been using 'done' lists for years. He uses them to record how long he has spent on each task, and at appraisal time to show what value he has brought to the company.

But no, filling in your timesheets is not the same thing. (I actually like those too.) Because noting that you spend 10 hours on the widget launch when you still haven't even broken the back of it is even more depressing. You need to list WHAT you did during those 10 hours to achieve satisfaction.

If, like me, you judge your productivity by how many items you've ticked off your 'to do' list, it goes without saying that you feel a bit of a failure when it just keeps growing. So just take a few moments (and it does only take a few moments) to scribble down everything you've achieved that day, or better still, that week. You'll be amazed at just how productive — and valuable — you are.